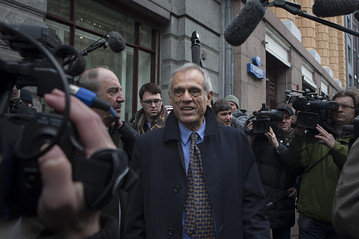 Investors are getting awfully creative in the way they play the volatility surrounding Europe and its crisis.

Amid a renewed flare-up of worries, one investor placed a big bet on European stocks but with a twist; dodging the impact of swings in the euro.

The tiny Europe Hedged Equity exchange-traded fund (HEDJ) stands to multiply in size in the next few days, thanks to a single $102 million trade yesterday.

Tuesday morning, an order hit the tape for 2 million shares of the exchange-traded fund at $50.72. HEDJ tracks a basket of European stocks while using derivatives to offset changes in the price of the euro and prior to Tuesday’s trade had just $46 million in assets.

On Tuesday, an investor who wanted exposure to the strategy likely enlisted a market maker to take the other side of the trade, said Chris Hempstead, director of ETF execution services at WallachBeth Capital LLC, a New York brokerage.

In this case, the market maker would “create” new shares of HEDJ by buying the underlying shares of stock, because the 2-million-share size of the trade sharply exceeded the roughly 900,000 shares of the ETF outstanding at the time.

“Now you’ve got a blockbuster trade, which will almost certainly be followed by creation of 2 million shares,” Hempstead said. “You’ll see assets go from 900,000 shares to nearly 3 million shares in one blink.”

The ETF’s holdings, such as Anheuser-Busch InBev NV , tend to pay high dividends and generate at least half their revenue from outside the continent. WisdomTree created the fund last year by tweaking an existing product that had applied the currency-hedging strategy to stocks around the globe, rather than Europe in particular.

Investors have been feeling better about European stocks after the beating that they took during the worst of the euro-zone debt crisis. Many of the region’s markets were up double-digits in 2012. However, the situation in Cyprus has some in the market thinking that the euro itself could be vulnerable. A decline in the value of the euro would hurt an un-hedged holder of European stocks.

A similar strategy involving Japanese stocks gained adherents lately. WisdomTree’s Japan Hedged Equity Fund (DXJ), which seeks to offset moves in the yen, has attracted nearly $3.5 billion in new cash so far in 2013, according to WisdomTree. Inflows to the fund are the highest year-to-date inflows of any U.S. ETF, the company said last week, citing IndexUniverse data. But the yen has been declining since late 2012  in the wake of efforts by Japanese Prime Minister Shinzo Abe’s efforts to revive the country’s moribund economy. But the prospect of a weaker yen could help Japanese exporters’ shares, investors say.

For more MarketBeat and other streaming markets coverage from The Wall Street Journal, point your mobile browser to wsj.com/marketspulse.

Australian Open: Maria Sharapova set to drop out of top 350 after defeat

Postpartum psychosis: ‘I tried to kill my baby and husband’